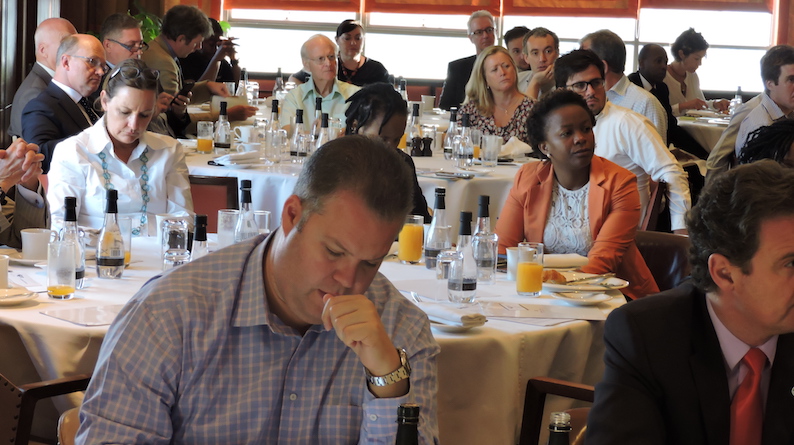 Ambassador Dr. Vincent O’Neill formally opened the first BIK Breakfast meeting in 2017. Held at the Capitol Club, the meeting theme was “Challenges to and progress being made in the doing business environment in Kenya.”

The Ambassador highlighted key achievements made by BIK in 2016, including a thematic focus in meetings, diversification of the membership, publication of the Doing Business Guide, a Ministerial visit in December, greater collaboration with the EU chambers of commerce and a stronger social media presence. He noted that two new members had been elected to the BIK Steering Committee: Kate Kiguru and Lisa Källbäck.

Plans for the new year include continuing with the thematic focus of breakfast meetings, commissioning market research studies, planning for BIK social events and more collaboration with Enterprise Ireland, with an agreement on a trade representative already underway and the appointment of a commercial attaché at the Embassy of Ireland in Nairobi.

BIK, in cooperation with the Embassy, is organising an outward visit to Ireland with a focus on education opportunities in Ireland. The Ambassador noted that BIK would be engaged in the Ministerial-led trade mission later in 2017. This year, the Embassy is planning to deepen regional cooperation with Embassies in Dar es Salaam, Kampala and Addis Ababa.

The Ambassador mentioned that St. Patrick’s Day, the national Day of Ireland, is scheduled to happen on March 17, with the Greening event taking place on March 14.

He noted that growth of the Irish economy remains strong (estimated at between 3-4 percent this year), with increasing domestic demand outpacing increased export growth. Unemployment continues to decrease and the budget deficit is now below 1 percent GDP, having been over 32% just five years ago. Genuine concerns to the Irish economy included Brexit, the Trump presidency and the EU rulings on taxation.

Ambassador O’Neill noted the 4 priorities of the Irish government in the ongoing EU negotiations:

Coutts Otolo of Parker Randall Eastern Africa, offered members the perspective of a leading consulting company with a good understanding of the Kenyan context. He noted the following considerations as the country was gearing up for elections:

Ahmed Farah from TradeMark East Africa outlined the perspective of an organization working to improve physical access to markets, address bottlenecks to a good trading environment and improve business competitiveness.

Challenges notwithstanding, Kenya was ranked the third most improved country globally on overall improvements in the business environment in the World Bank’s Ease of Doing Business Report 2017.

Tony Wood of ION Equity Kenya, an investor company in private businesses, gave an outline of the MyDawa app, a technology-based service that enables consumers to purchase authentic, high-quality medicines and health and wellness products. He noted that ION Kenya had chosen to roll out MyDawa in Kenya due to the robust mobile penetration and growing smartphone usage, innovation in Fintech and e-payment systems, and a healthy growing ecosystem of skilled labor, especially tech developers.

Train freight is also low in East Africa – about 3 percent of imports are moved by train in Kenya compared to 70 percent in Europe and 30 percent in South Africa. With the commissioning of the new Standard Gauge Railway (SGR) in Kenya, the target is set to increase to 30 percent freight movement. In reality, this will take time and the expectation is that heavy freight will be moved on train as it is more economical. Tracking companies will also push against rail use as they see their market share reduce.

State subsidies are expected to support the SGR in reaching its potential, as the SGR has significant political importance in the election year.

In his closing remarks, Ambassador O’Neill indicated plans to create a forum or platform outside of the BIK quarterly breakfast meetings to discuss and explore social impact achievements of commercial businesses.