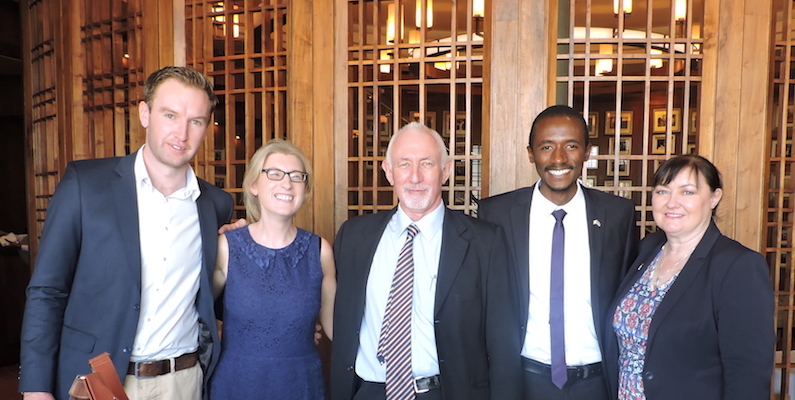 The 2016 Annual General Meeting (AGM) took place on Friday Dec. 9, 2016. The lunch-time event took place at the Capital Club in Westlands, the second AGM in a row to take place at the venue.

Based on membership feedback, BIK breakfasts took a specific sectoral focus and proved to be very successful, with average attendance of more than 60 representatives including industry experts, government officials and private sector representatives. During 2016, BIK held four breakfast meetings with the following focus:

During 2016, BIK membership grew by 47% (67 paid up members registered in 2016), resulting in increased diversity in the membership body and a widening network.

Thanks to the generous support of the Irish Government and the commitment and hard work of BIK’s Steering Committee members, BIK published the “Doing Business in Kenya Guide 2016.”

The purpose of the Guide is to present, in an accessible format, key information about the general economic and business context in Kenya. It details much of the practical information necessary to a business, including legal frameworks, the taxation system, the availability of key skills, regulations on labour and immigration requirements.

Developing linkages to other business Chambers

BIK increased engagement with its membership through the use of social media platforms and improvements to the BIK website during 2016. BIK is currently undertaking a membership satisfaction survey, which will guide and influence BIK activities.

Minister of State Mr. Joe McHugh, TD visited Kenya from the Nov. 29 to Dec. 2. A number of BIK committee and general members had a business lunch with him during his visit, during which they had the opportunity to exchange ideas on business opportunities between Ireland and Kenya.

This event was presided over by Ms. Sharon Gordon, Committee Member.

They were seconded by Mike Craig and Nick Stock respectively.

The other members of the committee were re-elected as follows:

Mr. Aly Khan was introduced by BIK Steering Committee Co-Chair Mr. Lau Larsen.
Mr. Khan provided a very erudite summary of where Kenya is placed among African economies. As an oil importing nation, Kenya has not suffered the loss in revenues that Nigeria and Angola have experienced. Kenya’s fiscal management has been commendable over the past two years as indicated by its relatively stable currency exchange rates.

Growth rates have been steady with an expected rate of 6 percent going into 2017, but projections in growth are likely to be negatively affected by less efficient development spending. There are warnings in relation to debt and the health of the banking sector. It is likely that pressure to consolidate will continue and the integrity and efficiency of banks will come under greater scrutiny.

The pressure and necessity for Kenya’s economy to continue to perform are immense against the backdrop of over 1 million graduates joining the job market annually. These people must have access to jobs if Kenya is to maintain social and economic stability. This is Kenya’s greatest challenge going into the future, as is the quest for peaceful elections in 2017 which will test Kenya’s economic leadership and political maturity in the region. Mr. Khan took some questions from the floor.