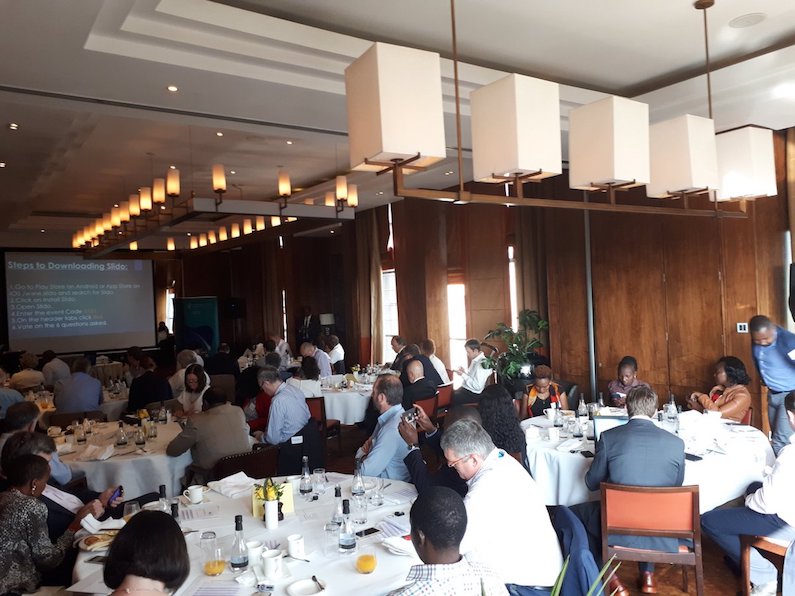 The BIK Breakfast Meeting was held on Friday, 23rd February, 2018 at Capital Club East Africa in Nairobi, Kenya from 7.30am-9.30am with 58 guests in attendance.

Niall Meany, Chair of Business Ireland Kenya, called the meeting to order at 7.45am

The Chair welcomed all present to the meeting, remarking that he was pleased to see new faces as well as familiar faces. For this first business breakfast meeting in 2018, he noted that the central theme was the Government of Kenya (GOK) ‘Big Four’ initiative centred on: manufacturing, universal health care, affordable housing and food security.

The Chair extended his thanks to the BIK Steering Committee, noting that the BIK is now self-funding in terms of core activities and has recently applied for funding via Ireland’s Department of Foreign Affairs and Trade Emigrant Support Programme in order to support projects, such as scoping of opportunities for BIK members outside of Nairobi. He explained that tables had been categorised into industry sectors and spokespersons were appointed at each table to formally introduce tablemates for networking.

The Chair introduced the Ambassador of Ireland who welcomed all present and provided a brief overview of recent economic developments. Ireland continues to have the fastest growth rate in the EU due to growth in employment, a rise in domestic industries and continued investment in Ireland by multinational corporations. There is a positive outlook even with the events of Brexit looming and the Irish Government has announced a national investment plan, ‘Project Ireland 2040’ initiative which entails an investment of €116 billion over the next 10 years in roads, housing, public transport, education, health-care and responding to climate change. With regard to Brexit negotiations, the first round has concluded and is soon to be enshrined in law, and the second round is ongoing and relates to the measures that will apply during the transition period. Ireland needs to maintain a good trading relationship with the UK and the EU post-Brexit. In spite of inflation and ongoing issues over corporate taxation, US companies continue to set up in Ireland; Microsoft in particular had announced a big expansion of its operations in Dublin.

The Ambassador also noted that Ireland is planning to increase its global footprint by opening new Embassies in New Zealand, Jordan, Chile and Colombia and new missions will be opened in Vancouver and Mumbai. In terms of trade between Ireland and Kenya, the Central Statistics Office has reported a 33% increase in exports from Ireland to Kenya and a 20% increase in Kenyan imports to Ireland.

It was noted that March will be a busy month based around The St Patrick’s Day celebrations, with events like the ‘Greening’. To that effect, a company based in Karen has been commissioned to create a life-sized lion in green made from recycled flip-flops which wash up on the coast of Kenya. Through sponsorship from KCB, the lion will be donated to the Kenya Wildlife Society and will reside in the Nairobi National Park as an educational resource on environmental conservation. The Embassy’s focus in the coming month is also based around the visit of Minister Kevin Moran who will visit from March 12th – 17th, during St Patrick’s week. He noted that Kenya is the only Irish Embassy in Africa to host a Ministerial visit.

The Embassy is currently at an advanced stage of agreeing a Double Taxation Agreement with the GOK. A delegation led by the PS of International Trade will visit Ireland in May to learn about Ireland’s experience in transforming into an agri-food exporter. The Embassy is working to remove bottlenecks particularly for Kenyan Students who wish to study in Ireland, consequently, it is focusing on increasing Ireland’s visibility in Kenya. The Embassy will also work with BIK on the social impact of investment by companies in Kenya.

Chris noted that the current overall security situation in Kenya is relatively peaceful, characterised by strong Government control. However, there have been recent security incidents of note: such as in Isiolo. He noted that the last significant terrorist activity in Nairobi was in 2014; however, there has been an increase in street crime, with a spike in crime around Karen and Eastern Nairobi.

An address was read by Mr Wangusi on behalf of the PS who was accompanying the President to EAC meetings in Uganda. The GOK recognised Ireland’s support to Kenya, including through Irish NGOs which have made a significant contribution. Ireland contributes almost €6.5 million annually to NGOs working in Kenya. Trade between the GOK and Ireland in 2007 stood at KES 4.5 billion and in 2016, it had increased by 82% to KES 8.2 billion. He noted there was also a lot of unexploited trade opportunities particularly around the ‘Big Four’ initiative recently announced by the GOK. The GOK has identified many Investment opportunities in Renewable Energy, Construction, Agri Food, Water Irrigation, Mining, and Tourism that will feed into the Big Four Agenda.

EIB is owned by 28 EU member states of which Ireland is one. The EIB has been in Kenya for 12 years, having 60 years’ experience in development finance. It is the largest multilateral lender and borrower in the world financing an estimated 450 projects each year in over 160 countries.

EIB has invested over €80 billion globally and in its 2017 portfolio, it mainly invested in innovation (13.8 bn), the environment (16.7 bn), Infrastructure (18 bn) and SME’s (29.6 bn) totaling to €78.2 bn in funded projects. EIB has also lent 1.3 billion euro to Ireland mainly for Transport and Education. EIB’s 2018 objective is centered on Sustainable Economic Development for the purposes of job creation, climate action and support for Sustainable Development Goals (SDGs).

Some of the challenges that EIB encounters when financing projects include, project bankability, capacity, land and resettlement issues and procurement procedures among others. To obtain EIB financing, projects must be eligible under the mandate objectives for that particular country/region where the project is located. It finances 50% of projects costs with a minimum loan size of €25m.

MML has over 37 years’ experience in Project Infrastructure Management and is focusing on the GOK ‘Big Four’. MML currently has projects in Mombasa and Eldoret. Previously, MML had around a 50:50 split of the workforce of Kenyans and expats’ this has now increased to almost 95% Kenyan. He elaborated on the GOK plans through Vision 2030 and the ‘Big Four’:

According to the United Nations Development Organisation (UNIDO) report in 2016, Kenya is the most industrially developed country in East Africa but with manufacturing accounting for only 14% of GDP. In an effort to improve the manufacturing sector, GOK plans to develop Special Economic Zones; SME parks; mini and integrated iron and steel mills and to transform the Kenya Industrial Research and Development Institute into a world–class research institute.

In order to achieve economic growth and shared prosperity, a nation needs to first sustain (feed) itself. The agricultural sector accounts for about 30% of GDP and is a source of 75% of industrial raw material. Economic growth catalysed by the development of agriculture can raise standards of living among the majority of Kenyans while reducing poverty and inequality.

In an attempt to reduce the housing deficit in Kenya, Vision 2030 has targeted the provision of 200,000 housing units annually for all income levels. MML suggests that GOK could rely on the private sector to provide financing for affordable housing with the Government actively supporting the sector by creating the right environment for lenders and developers. This can be supported by liaising with the private sector to attract financing through: Financial Institutions; Improving access to land; Providing basic infrastructure and Improving efficiency of accelerating mortgage registration and title transfers.

A BIK member poll survey was conducted using the ‘SLI.DO’ mobile app that the audience was asked to download. The audience actively participated and the following results in relation to BIK were presented at the end of the meeting (actual poll results attached):

The meeting was adjourned at 9.30am.

The next BIK Breakfast Meeting will be held at the same venue, on Friday, 20th April, 2018.