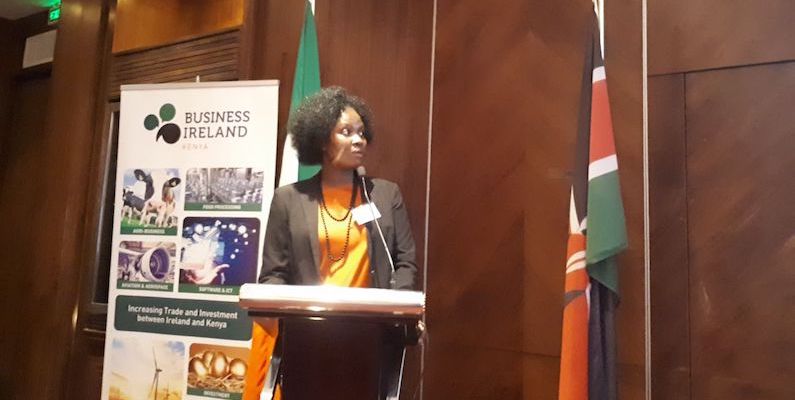 The Chair welcomed all present to the meeting, remarking on the good turnout. As the first thematic Breakfast Meeting of 2018, he noted that the AgriTech theme had been selected based on the findings of the Sli.do poll conducted of members at the first BIK meeting of the year in February. A large majority of members had indicated interested in this theme, and it had been one of the most engaging themes covered in previous years. However, given that it had been discussed previously, it was agreed that the focus would be specifically on the impact of technology in the sector; and the opportunities for deepening Ireland – Kenya business relations in the AgriTech space.

The Chair reminded members to contact the BIK Steering Committee or the Embassy with any issues or queries. He also mentioned several grants available for businesses, such as via Self Help Africa or RTI, which aim to promote food security in Kenya as part of the Government’s Big Four Agenda.

The Chair introduced the Ambassador of Ireland who welcomed all present and provided a brief overview of recent economic developments in both Kenya and Ireland. The Ambassador noted an upward trend in Kenya’s economic growth following 2017 in which growth was curtailed by protracted electioneering, drought and a decrease in credit lending according to a recent World Bank report. The report predicted a rate of 5.5 % growth in the economy for 2018. He also noted that prospects for further growth in Kenya are enhanced by growth in tourism revenue and steady increases in the volume of overseas funds remitted by the Kenyan diaspora. Kenya was one of the signatories of the African Continental Free Trade Area (ACFTA), which was signed by 44 African leaders and which has the potential to boost demand for Kenyan produce across the African continent.

On Ireland insights, the Ambassador noted that Ireland’s economy continues to grow – with a 4.8% growth rate as predicted by the Central Bank. He gave a brief overview of Ireland’s tourism industry as an example of a thriving sector; noting however, that economic growth could also be significantly compromised by infrastructure deficits (including housing); the possible implications of US tax reforms; and Brexit.

The Ambassador informed members of the Embassy’s trade priorities for the next 6 months; including:

The Ambassador introduced Michael Waiyaki (Board Member) and Eric Nyamwaro (National Coordinator) for the Young Scientist Kenya Initiative (YSK) which was launched in July 2017, modelled on the highly successful Irish BT Young Scientist and Technology competition. Preparations are underway for a national exhibition which will take place at KICC on 5-6 July. There is huge support and interest in the programme with an opportunity for potential sponsors to identify with Kenya’s Premier National Science and Technology event for secondary schools. He invited BIK members to consider supporting YSK and to speak with Eric and Michael for more information.

Chris noted that the current overall security situation in Kenya is calm. Recent political unrest included the suspension of Chiloba – CEO, IEBC – and the Miguna Miguna Case that may have potential impact on security. He noted the on-going lecturers’ strike including several public universities which has consequently affected the education sector and security. Crime security incidents of note included those in Kwale County and an increase in home invasions in Karen since January this year.

On terrorism, Insight has noted a significant spike in areas of Mandera and El Wak. Recent attacks in Mandera and Lamu were noted, as were concerns of terrorism unrest in Somalia.

Grant Brooke opened the session with an engaging run through of Twiga’s success story. Twiga is one of Kenya’s largest domestic marketplace distributors of products like bananas, potatoes, tomatoes and onions, among others. The company is four years old and was founded in collaboration with Peter Njojo (President, Coca-Cola Company West Africa). As an economist, Mr Brooke noted that 96% of food was sold at the ‘Mama Mboga’ kiosk vender level as opposed to at the supermarket level. This meant that small vendors had to travel back and forth to purchase small stocks of produce, and relied on middle men which resulted in fragementation in the purchasing power of the market place in Kenya.

He further noted that there was over 30% loss of farmers produce in the market. Some 45% of consumers’ spending in Nairobi is on food yet farmers’ incomes are not increasing relatively and production levels are declining. As a result, Twiga was founded to solve the bridging gap in the purchasing power of the small vendors bringing them to a single platform to present a stable market place and price. Farmers can ‘book in’ their stock with logistics covered, and distributors then delivering to small vendors across the city.

Mr Brooke emphasised how Agritech has influenced the Twiga business model, noting that Kenya should to be a leader in Agritech due to favourable factors such as great climate, low cost operating base and a climate of farmers ready to adopt to new agricultural measures. In this regard, he noted that there is a significant need to attract external/international Agritech firms into the country to innovate products within the Agri space. He also noted that the governance climate has significantly improved with respect to promoting the Big Four Agenda. The leaders in the agricultural industry are actively seeking help/opinions to boost the agricultural sector which has resulted in Twiga exploring further opportunities with the aim of promoting food security.

Dairy Africa is a consulting company supporting the dairy sector. Dr. Bwire presented the services offered by Dairy Africa Ltd; including turnkey dairy projects which involve the provision of complete dairy products and services that are ready for immediate use; such as technical advice on dairy farming, preparing business plans and source financing, farm planning and design and delivering & installing equipment; dairy equipment sales; knowledge transfer and farmer training and education and dairy farm nutrition services.

Dr. Bwire gave an overview of the dairy value chain to BIK members.

Dr. Bwire noted that limitations in the dairy value chain include breeds, poor management capacity, feeding and nutrition, seasonality of production, lack of advanced equipment, finance and lack of sufficient knowledge in the dairy sector. She added that the areas of possible partnerships are in dairy farm management and mechanisation, dairy processing plant, distribution systems and final consumers. Several Irish Agritech firms that Dairy Africa is working with include Dairy Master, Grasstech and Keenan.

Ireland has the highest standard of agriculture education in Europe and has established a good reputation of innovation across the agricultural value chain. Despite having a population of about 5 million people, Ireland produces surplus dairy and beef enough to feed about 35 million people due to highly efficient food production process. Approximately 50% (surplus) of food production in Ireland is exported.

Ms Källbäck noted that Ireland competes with the very best globally in terms of food quality with extremely low rates of antibiotics, hormones and high standards of animal welfare and full traceability. There are several on-going investments in R&D which is one of the major factors behind the success of Ireland’s Agritech industry. Irish manufacturing firms are leaders in specialised production of manufacturing products such as Slurry Equipment, Dribble Bars, Injectors and Side Spreaders.

Enterprise Ireland (EI) works with several Irish Agritech companies assisting them in innovation from the start-up phase to become established players internationally. Some of the companies that EI is currently working with in Kenya include: Hispec Engineering, Moocall, Dovea Genetics, Brandon and Gain animal Nutrition; all are seeking potential partners in Kenya to work with. Enterprise Ireland is also organising a Doing Business in East Africa conference in Dublin 11th June, and is planning for attendance at the National Ploughing Championships on 18th September 2018 and a Trade Mission to Kenya planned for November.

Following the guest speaker presentations, BIK members were invited to participate in a lively Q&A session which concluded at 9.30am. The next BIK Breakfast Meeting will be held on Friday, 6th July, 2018.