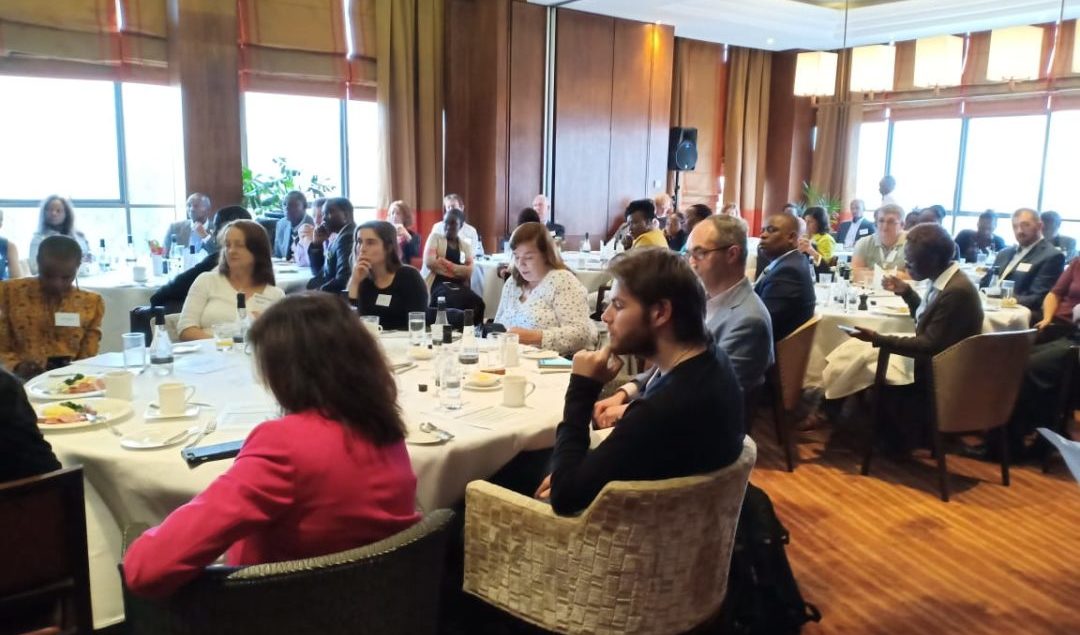 The third BIK Breakfast Meeting of 2018 was held on Friday, 6th July 2018 at the Capital Club East Africa in Nairobi, Kenya from 7.30 am with 63 members in attendance.

The Chair welcomed all present to the meeting, remarking on the good turnout and gave a brief overview of the breakfast agenda.

The Chair introduced the Ambassador of Ireland who welcomed all present and provided a brief overview of recent economic developments in both Kenya and Ireland. The Ambassador said that the EU Commission estimates the Irish economy grew at a rate of 7.3% in 2017 which is three times faster than the wider Euro area average, making Ireland the fastest growing economy in the EU. There was substantial growth in exports from Irish-based multinational companies and growth from domestic industries at 4.9 % in the first quarter.

He noted that consumer spending and construction are driving the country’s overall growth and an increase in employment and disposable income is driving personal spending. Risks include infrastructure particularly; housing deficits; costs of accommodation and housing inflation; over-reliance on corporation-tax intakes and Brexit related risks.

On Kenya-Ireland trade, there is a continuous upward trend, although from a low base and the highest traded services are financial services and communications. There are several new Irish companies expressing interest in the Kenyan market across different sectors that include; Food and Ingredients (Kerry); Engineering consultancy (Design Engineering); ICT; Financial services (e-CFS); Agri-business (Grasstech, Dovea genetics).

The Ambassador mentioned that the Africa Ireland Economic Forum will take place in October in Dublin and will be focusing on agri-business and women in business. An official invitation letter has been sent to the Cabinet Secretary of Foreign Affairs and International Trade, Prof Monica Juma. It is hoped that she will travel with a delegation of Kenyan businesses.

The Irish Government announced a new Global Footprint strategy earlier this month which seeks to deepen and broaden Ireland’s global presence and influence by 2025 inspired by the risks of Brexit, need for diversifying Ireland’s focus areas and to redress the trimming of Ireland’s diplomatic network following the years of recession. Ireland also formally launched its bid for a seat on the UN Security Council for the period 2021-22 at a launch in New York (2nd, July).

On Kenya’s economy, the Kenya National Bureau of Statistics has reported growth of 5.7% for the first 3 months of 2018 in its first quarter report of 2018. This was largely due to accelerated growth in improved weather / increased agricultural output, increased activities in wholesale and retail trade and growth in manufacturing (by 2.3%). However, several sectors including financial/insurance; transportation/storage; construction; energy still remain in slowdown.

There will be a Blue Economy Conference in November which will be held from the 26th – 28th November at KICC. The conference will have a very substantial private sector component and more information will be communicated.

Finally, the Ambassador informed the audience that a BIK sub-committee was formed to look into how businesses can contribute to social and environmental impact through the Sustainable Development Goals (SDGs). The Ambassador is chairing the sub-committee and has so far met with organizations that are leading on this front including Safaricom, KPMG and B-Lab, a company that has developed tools to assist businesses in assessing and measuring their social and environmental impact. The sub-committee is to have further discussions with some NGOs and the UN Global Compact chapter in Kenya and organize a round table consultation for interested BIK members in September or October.

Simon began by thanking BIK for giving him the opportunity to address the issues relating to immigration status quo as they pertain to businesses in Kenya and the ongoing work permit verification process. The following points were noted:

Chris noted that the current overall security situation in Kenya is calm. Recent terrorist activities were noted in June; two significant Improvised Explosive Device (IED) attacks on the borders of Wajir County with Liboi border in Garissa county and Mandera county. Large scale explosive devices were involved in both attacks that led to the deaths of five Kenyan security forces. However, this was a significant drop in the number of attacks over the previous months.

There has been however a major increase in crime security incidents in June that were not fire-arm related. Crime hotspots of note in Nairobi include Langata largely due to its proximity to Kibera and in Eastlands across Babadogo and Kayole.

On ethnically motivated violence, there has been a notable increase in violence between the borders of Isiolo- Samburu and Isiolo- Laikipia mainly involving cattle and livestock raids.

There was a disruption of the pipeline scheme with at least four banditry attacks on roads used by the trucks involved in transfer of oil from Turkana.

The smuggling of sugar that has hugely dominated the media recently has also been a significant theme and Warrior Insight will be closely following up the story. He concluded by addressing the recent insecurity issue in schools across the country that has led to significant reforms by the Teachers Service Commission.

Anne opened the session with an engaging video about Kenya as an investment destination. She introduced KenInvest as a state agency under the Ministry of Industry, Trade and Cooperatives with the mandate of promoting and facilitating investments in Kenya. In her address, she highlighted the following:

Key Components of Investment Facilitation include;

The State Department of Lands and National Lands Commission, County Government Representatives, Department of Immigration Services, Export Promotion Zone Authority (EPZA) and Special Economic Zones Authority (SEZA) were among the OSC representative agencies outlined. She then concluded her session by briefly mentioning the Big 4 and the opportunities arising.

Lisa gave some background on the Agri-food trade visit to Ireland in June organised by the Embassy. The composition of the group included Kenyan Government led by the Principal Secretary for the State Department of Trade, Dr.Chris Kiptoo, representatives of Nyandarua County Government, representatives from KEPHIS, the Private Sector and a media crew from K24 TV and Daily Nation (Seeds of Gold).

The programme included; meetings with key Irish Government and state agencies; tours of prominent research institutions and visits to successful companies in the food production, processing and export industries. The overall aim of the visit included;

Among the lessons learnt were; strong willingness and interest in Kenya from Ireland; the role of technology in agriculture, the impact of Government supports in terms of policy, incentives and facilities; importance of food safety standards and traceability; the opportunities for value addition; importance of good practice around sustainability and opportunities for export of Kenyan fresh produce (including melons, avocados and sweet potato).

Lisa noted that there are number of areas that the Embassy is already working on as a follow up to visit. She concluded her session by showcasing pictures of the visit and a K24 TV programme teaser on the visit.

Richard began by acknowledging the great hospitality that they had received in Ireland and cited that the Irish-Kenyan interaction should be enhanced and further intensified to promote tourism and trade. He noted that the trip was very successful and the lessons learnt particularly on agriculture and the impact of home grown technology is key to promoting the sector and food security as part of the Big Four Agenda. The key points of note from the visit include the following;

In conclusion, Richard thanked the Ambassador and the Embassy team for the successful visit and encouraged the Embassy to seek possibilities of organising a return visit to Kenya as a follow up.

Paul shared his experience from his attendance of the Enterprise Ireland Doing Business in East Africa Conference in Dublin and the opportunities presented. He briefly gave a background of the KNCCI noting that it is the largest chamber in Kenya with an international network of 177 Chambers, regional networks and a countrywide outreach of 47 county chapters. The Chamber operates around four pillars; Policy and advocacy, Trade development, SME development and County development.

On the Doing Business in East Africa Conference feedback, Paul mentioned that he gave a presentation on the “Quantifying the Opportunities” in the East African session noting that Kenya is a great hub for accessing the wider East African regions and the East African Islands (Comoros, Seychelles, Mauritius etc.)

Among the key regional highlights from the session included;

Paul also highlighted the different frameworks of the various EAC countries in terms of the National Development Plans and the opportunities presented.

The Big Four Agenda was also discussed in greater detail and the opportunities arising at both National and County levels. Other presentations from the conference was round the E.A Sectoral Overviews including; Financial Services, Agribusiness, Healthcare, ICT and the Big Four Agenda.

There were also four case studies from Irish Company’s experiences that included;

Paul concluded the session with a brief overview of the Investment Opportunities and Projects in Homa Bay County, noting that investors are greatly encouraged to enter the Kenyan market as they stand to benefit and at the same time improve the economy.

A BIK member poll survey was conducted using the SLI.DO app to gain insights on our members’ needs and their understanding of the SDGs pertaining to their business ventures. The audience actively participated and the results were presented at the end of the meeting (Actual poll results attached).

Following the guest speaker presentations, the meeting was concluded at 9.45 am and BIK members were then given the opportunity to network.

The next BIK Breakfast Meeting will be held at the same venue, on Friday, 5th October, 2018.