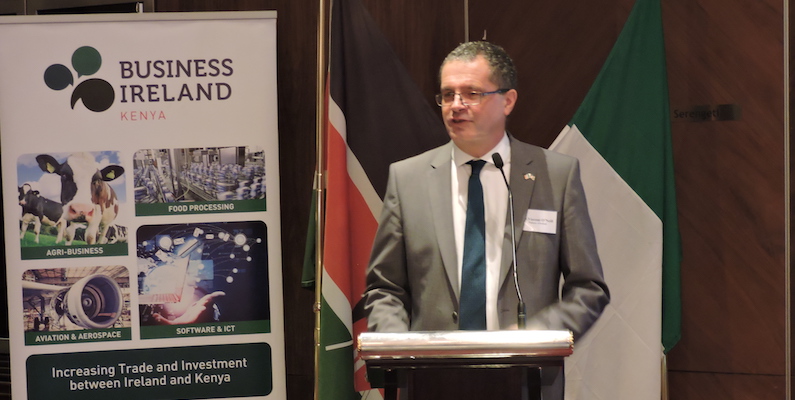 The AGM took place as a breakfast event on Friday, 1st December, 2017. The venue was the Capital Club EA, Westlands as was the case the previous year.

The BIK Co-Chair, Ambassador Vincent O’Neill, welcomed members and guests to the 2017 Annual General Meeting – with a festive flavor – noting that it had been a busy, yet very successful year for the network.

The Ambassador highlighted the 2-day visit to Kenya by Ireland’s Minister for Foreign Affairs and Trade, Simon Coveney. This was the first visit to Kenya by an Irish Foreign Minister since the Embassy re-opened in 2014. In the course of his visit, the Minister had an hour long meeting with the President; he had high level political discussions (including on trade expansion) with Cabinet Secretary Amb Amina Mohammed and her team; and he participated in a meeting between Kenyan and Irish businesses at Capital Club. He also officially opened the Irish Embassy. The Minister launched the new Ireland Kenya Agri-food Strategy and witnessed the signature of several business to business agreements between Irish and Kenya companies in agri-business; fisheries, education and ICT.

The Ireland-Kenya Agri-Food Strategy brings together plans for growing business in agriculture, fostering key institutional linkages between our countries and programming development cooperation in this sector. The strategy is another output of cooperation between the Embassy, BIK and Enterprise Ireland along with several Irish state agencies.

The Ambassador also noted that two of Embassy colleagues, Lisa Doherty and Kenneth Gitonga, travelled to Ireland for a first ever Team Ireland Trade promotion event. This event involved all Government Departments and State Agencies involved in promoting Ireland abroad. In the course of their visit, Lisa and Ken flew the Kenyan flag in terms of promoting Kenya as a business opportunity for Irish companies.

The Ambassador introduced the Newstalk ‘Down to Business’ team, Mr. Bobby Kerr and his colleagues Aidan and John, who were visiting Kenya for the first time. Bobby Kerr is the presenter of the hugely popular ‘Down to Business’ show on Newstalk Radio in Ireland. He added that Bobby would be featuring business opportunities in Kenya in his show the following Saturday morning – and that he would be interviewing several BIK members.

Niall presented the members with the membership structure and after a show of hands from the audience, the new fees structure was approved by the members present.

The BIK annual report was summarised and approved (and can be found attached). Jo presented some of the highlights of 2017.

Based on membership feedback, BIK breakfasts took a specific sectoral focus and proved to be very successful; with average attendance of 80 plus representatives, including industry experts, government and private sector.  During 2017, BIK held four other breakfast meetings with the following focus themes:

There were a number of firsts for BIK during the year, including facilitating a first members’ excursion. A group of 15+ members visited Tatu City in September to tour the development and explore potential investment opportunities. The network also held its first informal BIK social networking events, both hosted by the Ambassador at his residence on behalf of BIK.

Membership:
During 2017, BIK membership grew to 70 fully registered and 61 paid guests in the 4 breakfast meetings, resulting in an increase in the diversity of the membership and a widening of the network.

The Ireland-Kenya Agri-Food Strategy 2017-2021 – Our Shared Interests:
Thanks to the combined effort of the Embassy of Ireland and the Business Ireland Kenya network and the generous support of partners both in Kenya and Ireland, “The Ireland-Kenya Agri-Food Strategy 2017-2021 – Our Shared Interests” was launched by Ireland’s Minister for Foreign Affairs and Trade, Simon Coveney, in November 2017. The purpose of the Strategy is to present, in an accessible format, key information about Ireland’s overseas development and trade promotion objectives, while supporting the creation of new institutional linkages between Ireland and Kenya.

BIK Social Media:
The BIK website was extensively upgraded in 2017 in time for its launch at the BIK AGM on 1 December. The network also has an active social media presence on Facebook and Twitter.

Niall Meany was nominated as the 2018 BIK SC Co-Chair by the Steering Committee.
After a show of hands, the members present unanimously agreed and approved Mr. Meany as the new Co-Chair replacing Amb Vincent O’Neill.

It was further proposed that there would be two permanent seats in the Steering Committee: for the Embassy of Ireland and Enterprise Ireland. This was approved.

The other members of the committee retained their seats in the Steering Committee as follows:

The two amendments to the constitution proposed were passed by majority vote:
1) Revised membership fee structure for 2018
2) Two permanent positions in the Steering Committee

There was a brief presentation on the current security context in Kenya, and outlook for the coming period.

The new BIK website was launched and now features the following:

Mr. Zawlin Kassam and Ms. Caitlin Nordahl presented the new website to the BIK members and guests. Visit the page at: www.businessireland.co.ke

Mr. Gatende gave a brief presentation of Davis and Shirtliff, informing guests that they are the leading supplier of water related equipment in East Africa. He noted that the key principal product sectors include: Water Pumps, Boreholes, Swimming Pools, Water Treatment, Generators and Solar equipment. He added that they have 33 branches in Kenya with 4 new branches recently opened outside Nairobi and 25 branches in the East Africa region. He noted that he is very positive about growth aspects in 2018, as they look forward to increase business in the new year after the election period has ended.

Mr. Gatende went on to outline three areas that attributed to the success of Davis & Shirtliff:

Mr. Nyaoga provided an erudite summary of the effects of the elections on both the economy and the banking sector; asserting that elections come with political risks affecting the economy every 5 years. He noted that the growth of the economy slowed down due to the ‘wait and see’ perspective from both local and international investors. Some of the challenges that the Central Bank faced during the political period included those related to withdrawal limits and the drop in the shilling after the Supreme Court Presidential Election judgement.

He noted the concerns about limited access to credit by businesses with the new interest cap. He informed members that the interest cap was introduced in Parliament to act as a price control. The main challenge was implementation. As a result, financial institutions have become overly cautious as small businesses and enterprises are having a difficult time in the market. The bank is conducting research on the effects of high caps. He went on to address the concerns about Kenya’s growing level of debt. He noted that in the last few years, corruption issues have been featured on both print media and broadcast news.

Ms. Kariuki gave her perception on how the country can move forward from 2017. She informed the members that optimism is not lost and that investors are still interested in Kenya as a business hub. She noted that there had been recent visits from international investors from Belgium and France despite the election period, showing that the Kenyan market is of high interest to the investors.

To increase the availability of jobs in the country she noted that the manufacturing sector is where 20-50% of the jobs are readily available. Empowering the youth to participate in technical training would help them in acquiring the hands-on jobs available in the manufacturing sector. Furthermore, Kenya has the fastest internet in Africa and 14th in the world, creating more online jobs would help reduce the unemployment rate in the country since every business is into technology, using social media to market and conduct their day-to-day business transactions. She concluded by stating that the best way to deepen the business relations between Kenya and Ireland is by investing in areas of interest to both Ireland and Kenya; for example in agri-business and ICT.

Mr. Waluchio gave a brief background of Oxygen8 East Africa. Oxygen 8 Group are a global provider of integrated mobile solutions with offices in 11 countries, operations in over 32 countries and a turnover in excess of 120 million euros. Working in partnership with its clients, Oxygen8 enables businesses to drive new revenue streams, improve customer communication, build brand awareness and increase customer loyalty. He added that the management team draws on many years of experience and expertise, having been at the forefront of the mobile marketing industry especially in the mobile betting sector, since its inception.

He noted that as a company, they are leveraging on Ireland to get professional help in getting foreign investors in the country in the betting sector so as to merge their knowledge. He also added that there are vast business and growth opportunities in the Fintech industry; that is in mobile lending and insurance. In addition, smart partnerships would be key when doing business with Irish companies as they require data for their technologies which most African countries have. This would enable Kenyan companies to compete globally.

Ambassador O’Neill opened the floor to questions and comments:

Responses from the panel

Dr. Vincent O’Neill concluded the session by acknowledging the contributions of the panellists and audience members. He presented the panellists with a token of appreciation each. He suggested that the focus of BIK in 2018 would be to engage in ongoing work that takes into consideration the whole East African region, to work with the county governments to support job creation and to increase Kenya-Ireland trade relations. He also noted that there is a need to link businesses to corporate social responsibility which would be further explored by the Steering Committee in early 2018. He thanked all participants for their support and urged members to pay early for their subscriptions for 2018. A card noting the dates for BIK Breakfast Meetings in 2018 was circulated to all members.