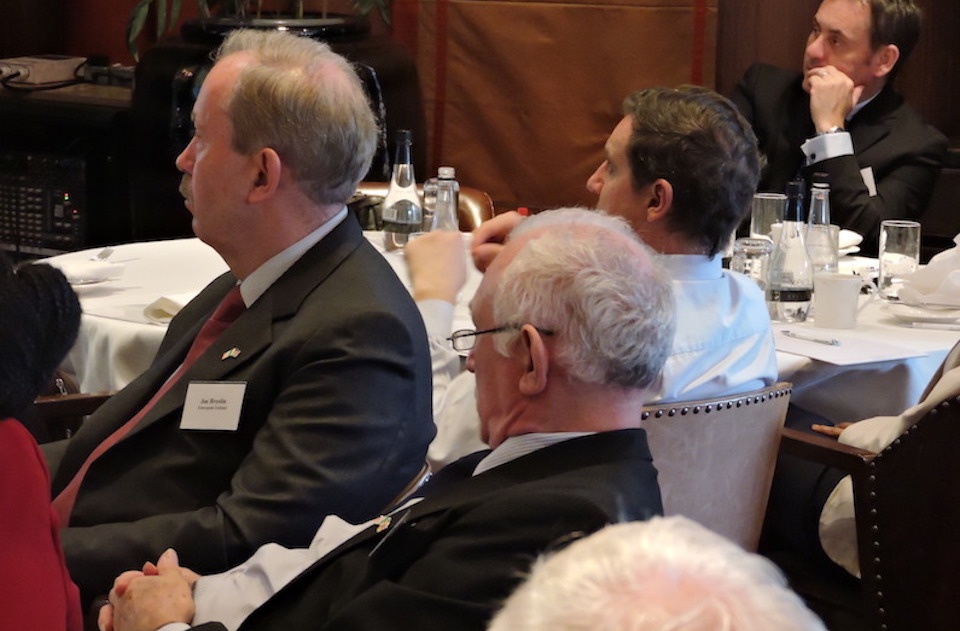 BIK members came together for a Breakfast Meeting at Capital Club on July 6, 2017. There were approximately 80 members in attendance, including 5 newly registered members and guests.

The Ambassador of Ireland to Kenya Dr. Vincent O’Neill provided the opening remarks, welcoming BIK members and special guests at the meeting. These included Secretary General of the Department of Foreign Affairs and Trade of Ireland, Mr. Niall Burgess, who was on his first visit to Kenya since the embassy reopened in Kenya; Mr. Ruairi de Burca, Director General, Development Cooperation Unit (DFAT); and Ambassador Fionnuala Gilsenan, Africa Director DFAT.

Ambassador O’Neill noted the Ireland’s attractiveness as a business destination, having recently been ranked second in the Euro Zone for global competitiveness. Further, the Irish economy was the fastest growing economy in the Euro Zone in 2016.

From the Kenyan perspective, O’Neill reported two recent developments improving the country’s business environment. The President of Kenya, H.E Uhuru Kenyatta, recently opened the Standard Gauge Railway (SGR) from Nairobi to Mombasa, which is now transporting cargo and passengers between the two cities. Kenya also recently earned the distinction of having the fastest internet speed in Africa, a fundamental driver of business investment. Kenya surpassed South Africa to earn the title.

As the elections approach, the Ambassador explained that the Embassy is working on contingency plans to ensure the safety of citizens of the Republic of Ireland living in Kenya during the election period. He also added that the Embassies of the EU member states had a meeting with the President of Kenya to express their fears and concerns for their citizens in the country during the election period. The President expressed his commitment towards a peaceful election and assured the representatives that he would accept the outcome of the elections.

In regards to the previous BIK Breakfast meeting, which covered education, the Embassy and BIK have accepted an invitation to participate in the September Education Fair in Kenya, where they will have a stand to promote education in Ireland and enable interested parties to go to Ireland for their third level education.

Lastly, the Young Scientist Kenya competition was recently launched, with support from the Embassy. Safaricom has agreed to provide an initial sponsorship (amounting to KES 20 million in 2017) for the event.

Niall Burgess, Secretary General of the Department of Foreign Affairs and Trade of Ireland

Mr. Niall Burgess gave a brief personal account of his stay in Kenya, informing the guests that this was his first visit to the country. He emphasized education, saying that sparks prosperity and growth.

Burgess pointed to the strong and historical connections between Kenya and Ireland, including educational ties but also extending to both countries’ are post-colonial commonalities.

He noted both countries’ resiliency and their strengths, such as the premiums invested in education, the strong entrepreneurial spirit of both Irish and Kenyan citizens, the countries’ respective Diaspora networks and the openness and welcoming nature of Kenya and Ireland’s societies

He also mentioned that Ireland is facing some problems despite being recognized as a dynamic economy in Europe, such as Brexit.

Burgess acknowledged the efforts of the Ambassador and the BIK in making the association what it is today, prompting members recognise it as the fastest growing business network in Kenya. He highlighted the importance of the BIK network for discussing issues and establishing strong business ties to enable thriving trade between Ireland and Kenya.

Simon Roberts provided a security brief mainly on the upcoming elections. He outlined the security risks that the elections would pose before, during and after the elections.

He added that the main cause of tension and likely outbreak of violence would be to contested Presidential result, interference with voting materials, failure of the bio-metric voting system and widespread mistrust among the citizens caused mainly by conspiracy. He mentioned the ongoing court cases and noted that the IEBC has a close watch on candidates and voters to block hate speech and other causes of violence. He urged the Irish residents to gain daily election insights and stay well informed before and during the election period.

Siniscalchi provided an overview of Ireland’s business environment, particularly the Irish Agri-Tech industry, which focuses on grassland and crop framing, dairy and livestock farming, crop/animal chemical products, smart farming applications and processing and packaging. According to Siniscalchi, EI will provide in-depth information on Irish technology and service providers, arrange introductions to potential suppliers and, if need be, organise a fully planned trip to Ireland to meet the suppliers in person.

Some of the Irish companies that are ready to partner with Kenyan companies:

The National Ploughing Championships held in Ireland has become one of the largest European agricultural trade exhibitions, attracting approximately 1,700 exhibitors and 283,000 visitors globally. Siniscalchi informed the audience that EI is ready to support Kenyan companies with innovative ideas that would benefit at the Ploughing Championships this year, to be held from Sept. 19 to 21 at Screggan, Tullamore, County Offaly.

Viktar Proshchanka gave a personal accoun personalized account of his experience in Kenya, both as a business man and as a father. He also gave a short background of his family and his stay since 2010, when he came to Kenya. He later gave a brief history of Norbrook stating its establishment in 1969 as well as their exporting route in East Africa and that they have a manufacturing center in Kenya.

He informed the members and guests at the meeting that following his seven years in business in this country, he believes that Kenya and the region provide very good opportunities for investments by Irish businesses. He noted Kenya’s good infrastructure network, business mobile banking developments, established distribution network and support for manufacturing companies.

He outlined the following as some of the lessons he has learned when it comes to doing business with companies in Kenya:

Kamau Kuria outlined Kenya’s main needs in the Agro-processing/Agri-tech sector, emphasizing potential areas of collaboration and opportunities for investment. He added that Kenya’s Vision 2030 aims to increase the country’s annual GDP growth rate to 10 percent, with agriculture being one of the main drivers of economic growth.

He gave a brief introduction of Kenya Market Trust (KMT), a Kenyan institution that aims to effect systematic change in the country’s markets. In line with their strategic objectives, KMT influences key decision makers to think differently about how markets work and their importance to inclusive growth in Kenya. This allows market actors to bring about the changes and deliver large-scale transformation in the where they markets they work.

KMT’s work intersects with Irish business interests in a number of areas, with specific investment opportunities lying in:

Kuria noted that Ireland and Kenya on a state level can cooperate on: