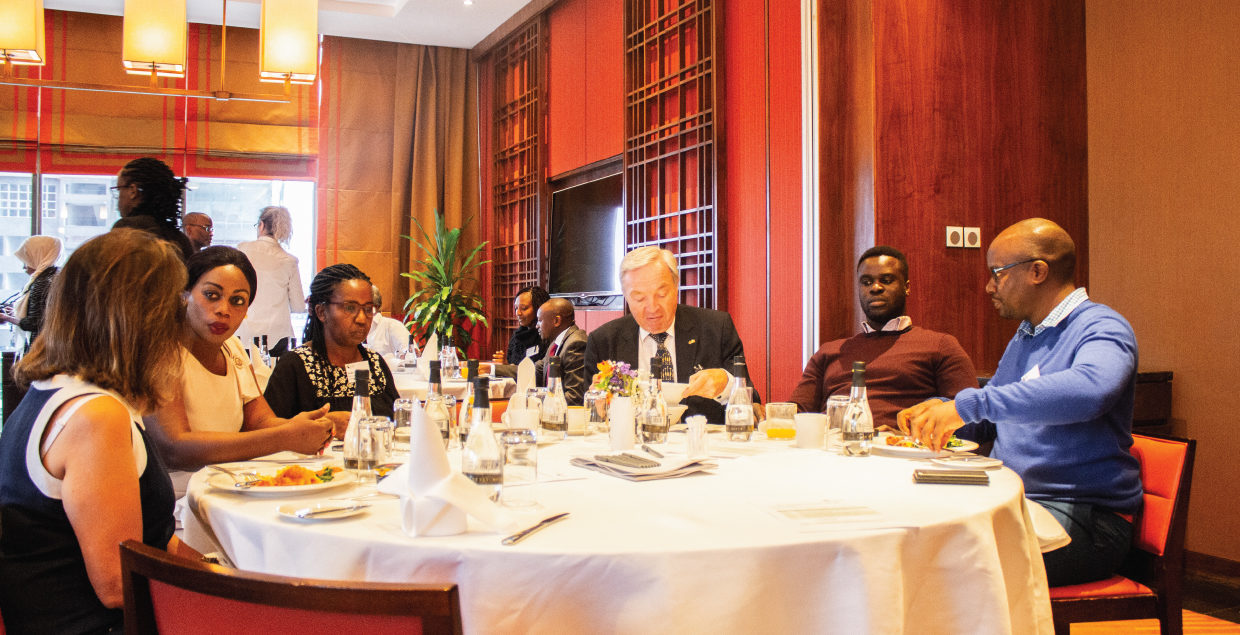 The third BIK Breakfast Meeting of 2019 was held on Friday, 5th from 7.30 am at Capital Club East Africa with approximately 70 attendees.

Mr. Gillen welcomed the members to the third meeting of 2019. He welcomed new corporate members that had joined the network and encouraged others to join. He shared updates on BIK that included the Trade Mission organized by Embassy Nairobi, a meeting with the Export Promotion Council to discuss potential partnership, collaboration with Business Ireland South Africa and Business Ireland Africa to explore additional opportunities for members.

Notably, he gave an update on the scoping study carried out by BIK in Nakuru County sharing that the report had been finalized and that there had been a visit to give a high-level overview to those that contributed to the study, the Nakuru County Governor and his team He further updated that an official launch was being planned by the Steering Committee.

As part of the Corporate member benefits, Mr. Felix Mbaya, Senior Area Sales Executive from ARAMEX gave members a brief on their Shop and Ship product.

Mr. Hockey gave an overview of significant security risks affecting business in the country. In regard to crime, there was a decline in gang-related activity in Nairobi County but a rise in cases of kidnappings for ransom and ATM withdrawals. Public disorder was noted to have decreased but there were isolated incidents in Nairobi involving Boda Boda and small scale trader protests.

Ethnic violence in the North Rift had seen an increase since May 2019, this was mainly attributed to the low rains and scarcity of resources. He, however, lauded the government on the disarmament drive that saw members of the public return their unregistered firearms. There had been cases reported related to terrorism mostly targeting security forces and in the Country’s political scene there is keen interest on the ongoing border dispute with Somalia and the upcoming 2022 elections.

This was Ambassador Fionnuala Quinlan’s first BIK meeting, she shared delight on being in Kenya and looked forward to engaging with the BIK network. Her presentation focused on the state of the Irish and Kenyan economies and gave insight into the Embassy’s work in strengthening trade relations between the two countries. She noted that the Irish economy is in good shape and a range of indicators suggest that it has continued to grow and the GDP is expected to increase by 4% in 2019. However, there are significant challenges ahead that will likely affect trade including the risk of a disruptive Brexit.

Trade between Ireland and Kenya has shown a continued upward trend with a 3% increase in total trade in the first quarter of 2019 compared to a similar period in 2018. Imports from Ireland to Kenya indicate an increase of 21% with growth driven by dairy, medical and pharmaceutical products. Reports show that exports from Kenya to Ireland have decreased by 14% in the first quarter of 2019, this is most evident in the vegetable and fruits sector. Financial services and communications still remain the highest traded services.

According to the World Bank Kenya Economic Update, Kenya’s real gross domestic product is projected to grow by 5.7% in 2019 and while the medium-term growth outlook is stable, the report notes that recent threats of drought and continued subdued private sector investment could drag down growth in the near-term. The growth forecast for 2020 stands at 5.9%.  The 2019/2020 Budget focused on the creation of jobs, transformation of lives and harnessing the Big Four plan, this will be supported through measures such as settling the current backlog of VAT refunds and pending bills for all suppliers, proposals for faster clearance of cargo and port inspection improvements.

Amb Quinlan shared updates on Embassy projects seeking to promote trade and investment between the two countries. This included the Trade Mission hosted in May for companies in the agri-food and agri – tech sector, a Double Taxation Agreement which is projected to be finalised and signed in 2020, the pilot programme that will allow for processing of student visas locally which will reduce processing time and collaboration with KEPSA and KenInvest to support growth of investment in the country.

Mr. Gudka is the Chairman of the Kenya Association of Manufacturers (KAM). He possesses extensive financial and investment management proficiency as well as a deep knowledge on manufacturing from his position as CEO of both Skanem Interlabels and Rodwell Press. His presentation focused on an overview of the current state of manufacturing in Kenya and projected outlook for the industry with specific insight from KAM and the roles it is taking as a body to improve the sector. Manufacturing accounts for 7.7 percent of Kenya’s GDP and though the sector has declined over the years due to the fast growth of other sectors it still accounts for the highest share of Government revenue. The Kenya Industrial Transformation Programme (KITP) seeks to grow the shares of the manufacturing sector as a percentage of GDP from 9.9% to 15% by 2022.

To address all aspects of the sector, KAM focuses on four key areas for lobbying and advocacy, these are competitiveness, illicit trade, access to market and a stable environment to conduct business. He gave comprehensive updates on each of the key tenets of their lobbying strategy including challenges encountered, discussions with government agencies and milestones achieved so far.

Mr. Gichohi is a Director at MML Turner & Townsend, he has over 10 years’ experience in project management. His presentation focused on manufacturing within the context of the construction industry. There is an emerging trend in global expansion, this is showcased through the emergence of smaller targeted production facilities where delivery and proximity to market are key drivers.

The Government’s Big 4 Agenda aims at increasing exports and ensuring 70% of housing materials used in Kenya are locally produced. He gave insight into project areas that have great impact from project selection and set up to risk/ reward and stakeholder management.

His presentation gave an overview of the project management cycle and areas where there is greatest impact when delivering a project. He shared key projects being implemented in the country that contribute to the construction industry and promote the manufacturing sector. He stated that an increase in demand for commercial and residential buildings would result in the growth of cement, paint and construction materials among others.

Mr. Peter Scott is the founder and CEO of Burn manufacturing, a globally recognized leader in the clean cookstove industry that has pioneered the design and manufacturing of stove solutions for more than 20 years.  His presentation focused on manufacturing within the context of innovative products, he noted that manufacturing could be beneficial and sustainable. Traditional cooking methods threaten lives, destroy forests and use up household income; increased use of fuel-efficient products will alleviate the challenges caused by traditional fuel methods.

Burn has sold 630,000 super fuel efficient biomass cookstoves in East Africa since 2013 and in 2014 the company launched the first and only modern cookstove manufacturing facility in Sub – Saharan Africa and is now poised to expand their product portfolio in Sub – Saharan Africa and beyond. Mr. Scott shared key growth projection plans and gave a demonstration of the Jikokoa stove.

MINUTE 6: Comments and questions from the floor

Members were keen to engage the speakers on their different subject areas and Ms. Kathleen Vaughan opened the floor for a few questions from those in attendance. Some of the questions that were asked are recorded below.

Q1. Where do you source raw materials for the Jikokoa product?

Mr. Scott shared that the materials are 50% locally sourced and 50% internationally sourced. He noted that the product is made up of alloys and some of the raw materials are not readily available in Kenya. The company, however, makes use of as much local product as possible in order to promote Kenyan business and contribute to the industry.

Q2. How does MML Turner & Townsend go about sourcing and selection of contractors?

Mr. Gichohi stated that having a clear brief from the onset of the project was the key to successfully selecting contractors. Local contractors are well versed on the industry except in cases where the project requires the hiring of a specialist who is brought in to head the project. He noted that Kenyans adapt fast and the rate of skills transfer is remarkable which in turn ensures that the local contractors are well placed to achieve the outcomes of the set-out project.

MINUTE 7: Conclusion of the meeting

Mr. Gillen announced that Young Scientists Kenya would host a media launch at Jamhuri High School on 11th July and would have a National Exhibition at KICC from 6th – 9th August. He invited members to participate and support the program. He noted that the Nakuru County Director of Trade, Investment and Industrialisation.

Mr. Gillen closed the BIK Breakfast Meeting and thanked the speakers for their extremely informative and engaging inputs.

The meeting was concluded at 9.40am and BIK members were then given the opportunity to network in their own time and ask further questions of the speakers as required.

The next Business Breakfast will be held on 4th October 2019. An agenda will be shared with BIK members in due course.