Mr Gillen welcomed the members to the first meeting of 2019. He gave updates on the BIK website redevelopment and encouraged members to interact with the BIK social media channels to keep up to date with activities scheduled for 2019. It was noted that there were four Business Breakfasts and two social events planned for the year with the first social event being held on 14th March at Kengeles, Lavington to kick off the St Patrick’s Day week of celebrations. 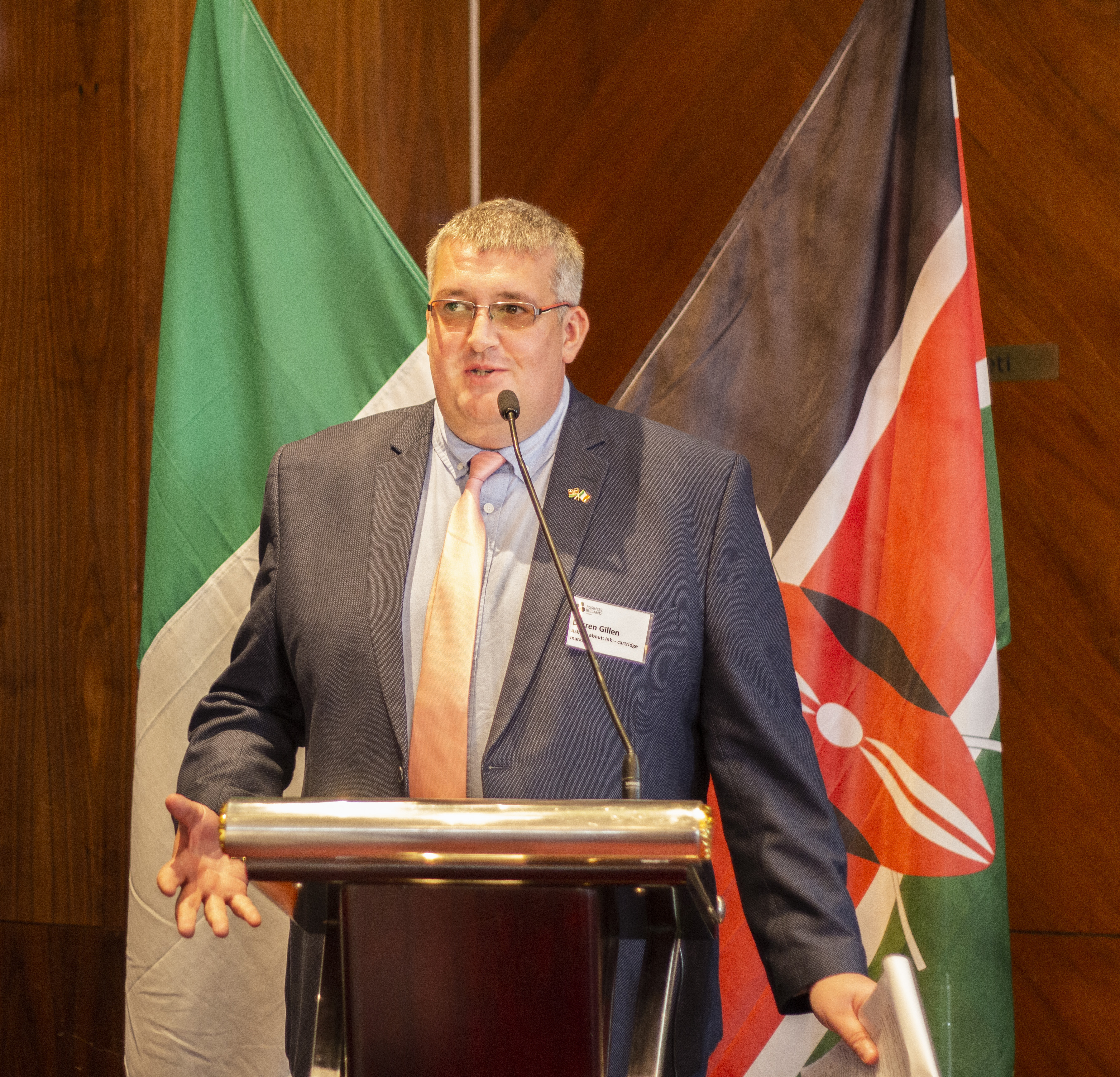 MINUTE 2: Update from the Embassy of Ireland – Ms Lisa Doherty

Ms Doherty, Acting Ambassador at the Embassy of Ireland gave an overview of the state of the Irish and Kenyan economies and updates on the Embassy’s work in strengthening trade relations between the two countries. It was noted that in 2018, Ireland had the fastest growing economy in the EU for the 4th year in a row with projections of just over 4% growth expected in 2019.  Ireland will be the only English speaking EU country post-Brexit, with a pro-business environment and access to a wide market given its strategic location as a gateway to the EU.

In regard to the Kenyan economy, growth is expected to continue in 2019 due to solid domestic demand and continued increase in private consumption buoyed by tight labour market, solid remittances, an upbeat business environment outlook and provided there is good rainfall, will benefit from increased agricultural productivity and steady hydro power generation.

Kenyan – Ireland trade continues to grow in an upward trend. In 2018, there was a 10% decrease in imports from Ireland to Kenya as a result of decrease in import of metals, and an increase of 17% was noted in export of coffee, tea and spices from Kenya to Ireland,

The Embassy continues to work towards improving trade and investment between the two countries through various initiatives that include upcoming trade missions from Ireland, progressing a double taxation agreement, continued support to KenInvest’s  One Stop Centre, support to KEPSA to establish a business hub, launch of catalytic funding for SME’s in potato, dairy/livestock and fisheries sectors, scoping opportunities Kisumu, Mombasa and Nakuru Counties  in partnership with BIK and engagement through Young Scientists Kenya (YSK).

Mr Hockey gave an overview on significant security risks affecting business in the country. He shared an update giving insight into major cases of insecurity recently reported in Garissa, Lamu, Nairobi (14 Riverside and the Central Business District – CBD). He cited the counter terrorism offensives launched to tackle the incidents commenting that the progress made in fighting terrorism in the country was highly commendable.

Public disorder activity dropped significantly in the period reported with rising concern in regard to industrial action involving airport workers, nurses, lecturers all within the last month. He cited other recent developments including the diplomatic spat between Kenya and Somalia, a proposal to arm private security guards, banking security and banks’ reluctance to report suspicious activity and the potential referendum.

Mr Murphy is a senior partner at Viva Africa Consulting and his presentation – Old sins cast long shadows – gave an insight into the ramifications of not declaring taxes. He noted that countries make use of the Common Reporting Standards (CRS), an information standard for the Automatic Exchange of Information regarding bank accounts on a global level between tax authorities, developed by the Organisation for Economic Co-operation and Development (OECD) in 2014. In 2016, Kenya signed the Multilateral Convention on Mutual Administrative Assistance on Tax Matters (MCAA) that enhances exchange of information on request, spontaneous exchange, automatic exchange, tax examinations abroad, simultaneous tax examinations and assistance in tax collection. CRS falls under Automatic Exchange of Information.

Countries that sign up to the CRS introduce a tax amnesty to give everyone a chance to get their tax affairs in order. In Kenya, the Finance Act 2018 introduced an amnesty on similar terms, covering all periods before 2018 with 30 June 2019 as the deadline for submitting an application.

He concluded by summarising key points through the pros and cons of an amnesty.

Mr Nyamori is the Regional Operations Manager, Government and Trade Services at Intertek East Africa and his role involves engagement with bureaus of standard, government entities, ministries of finance and customs bodies.

He gave an overview of the conformity and fiscal programmes run by Intertek including the Conformity Assessment Programme that involves verification of shipments and ensuring that products comply with the appropriate national and international standards; the benefits of Conformity Assessment programmes largely relate to the prevention of importation of sub – standard and counterfeit products, support of local producers against unfair competition and facilitation in Customs clearance among others

In 2015, the Minister for Trade and Industry established the Pre – export Verification of Conformity to Standards Program (PVoC) that requires all imported goods destined to Kenya to undergo mandatory inspection in the country of origin or supply prior to shipment into the country unless specified under the set out exemptions.

Dr Akoten is the Deputy Director, ARQA, Anti-Counterfeit Authority (ACA), The ACA is a State Corporation in the State Department of Trade, in the Ministry of Trade, Industry and Cooperatives. The Authority is working toward a counterfeit-free Kenya so that businesses can carry on with business in a cohesive environment. The parliament of Kenya enacted the Anti-Counterfeit Act No.13 of 2008, to prohibit trade in counterfeit goods

He gave insight into the work the ACA carries out in working toward fulfilling the Big 4 Agenda and inter – agency collaboration to achieve the set out mandates. Dr Akoten noted that counterfeiting is intertwined with other criminal activities such as tax evasion or even import and export of sub-standard goods stating that combating all the challenges required private and public partnerships with key inter – governmental collaboration through Legal Frameworks. Coordination of different bodies is fulfilled through the Inter-Agency Anti-Illicit Trade Executive Forum established through Gazette Notice No. 7270 of 20 July.

He further highlighted the offences under which individuals can be penalised or prosecuted; with all offences clearly outlined in the Act.  Dr Akoten shared the challenges the ACA faces in carrying out the assigned duties citing key issues and concluded by sharing areas of potential collaboration with BIK members and other agencies that could enhance the work of the ACA. 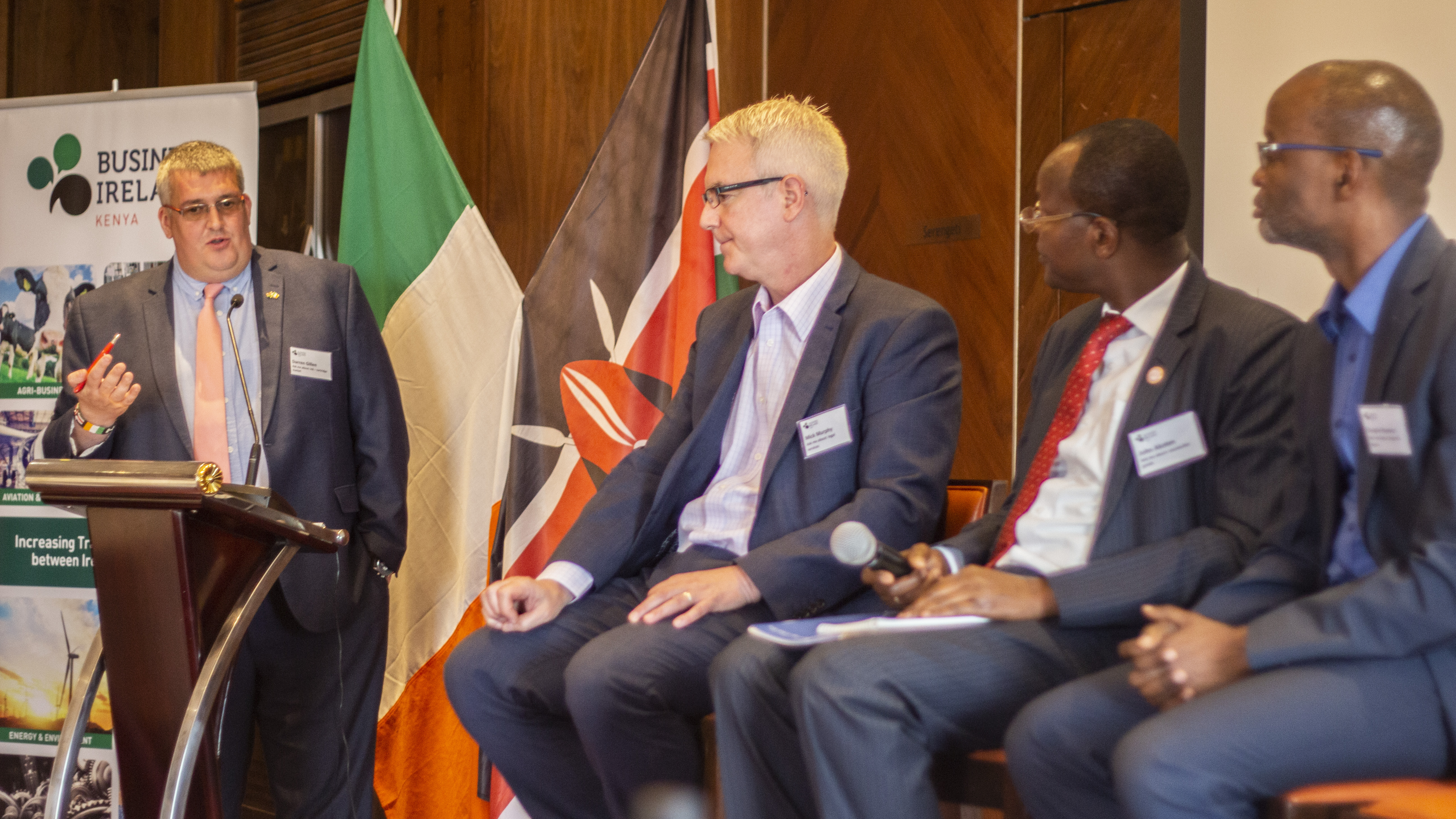 Minute 5: Comments and questions from the floor

BIK Chair – Darren Gillen – invited the speakers onto the stage and the floor was opened for general questions.  Some of the questions that members and guests asked and answers provided by the panel are recorded below.

Q1. Apart from the Certificate of Conformity and international trademarks, is an importer required to acquire an anti – counterfeit mark?

Dr Akoten clarified that the COC and counterfeit marks are different as the COC deals with standards of the goods and would not cover counterfeiting. ACA had worked with KEBS in the past to try and curb counterfeit but this proved to be an inefficient method. The Authority collects all relevant information on the goods being imported in order to verify their validity, this is certified and goods are given an anti – counterfeit mark.

Q2. To what extent is the ACA mark incorporated in the product registration and licensing of products, if a product is licensed and registered, do you have to get the mark?

Dr Akoten stated that the key details on the counterfeit mark are under review and will be finalised. Focus is currently on imported products but there are discussions on one mark to cover all regulatory requirements from different bodies but this will be concluded and shared.

Q3. What is the ACA procedure when dealing with refills? Particularly for products that have genuine packaging but require refilling.

Q4. There are corporates that import large number of products and the requirement to register each product can become rather costly, what steps have other organisations taken to handle this?

Mr Nyamori shared that Intertek allows companies to register groups of products to categorise similar items as one at a fee that would reflect the same.

Q5. How does an organisation handle delays with KRA clearance?

Mr Nyamori stated that if all regulations have been met, the best way to navigate this would be to escalate to the customs director at KRA who would be able to assist.

Q6. Are there tax obligations for organisations that export to other countries within Africa but have not been applying tax to goods sold in these countries? How does an organisation justify the same to KRA and how would the tax bodies for countries that apply taxes collaborate with KRA in fulfilling their mandate?

Mr Murphy shared that most countries in Africa have a form of withholding tax. The income tax act of Kenya does not provide a relief for withholding taxes unless there is a double tax treaty in place. Kenya does not have a double tax treaty with neighbouring countries (EAC); this makes export to these countries expensive as you pay taxes to each. An option would be to look for alternatives to solve the issue as a double tax treaty is unlikely to be signed in the near future. An example would be to licence in a different jurisdiction and then that country can make use of the reliefs offered or the organisation gross up fees to cover the overall costs and reduce losses.

Q7. In light of new legislation that has been put in place, what is the position on unbranded goods?

Any goods imported into Kenya must have a brand mark.

Q8. What are the tax requirements in Kenya on services provided to organisation in countries abroad or export of services?

Mr Murphy shared that there had been a rise in cases related to VAT on export of services with KRA questioning where the consumption of the service is. He suggested that the best option would be to seek additional guidance as the organisation is exposed to huge risks.

Q9. For organisations that import technology hardware, cases of inconsistency in clearance of shipments have been noted whereby requirements for clearance are always changing to cater to the all components of the gadgets being imported.  What is Intertek doing on consistency in relation to import of equipment during different shipments?

Mr Nyamori shared that if the importer had all necessary documentation and reports clearly outlining all components of the equipment, Intertek uses these documents in relation to each shipment.

Minute 6: Conclusion of the meeting

Mr Gillen closed the BIK Breakfast Meeting and thanked the speakers for their interesting and engaging inputs. He noted that BIK and the organisations represented should partner more regularly to discuss regulations that affect the business environment that they all operate in.

The meeting was concluded at 9.50am and BIK members were then given the opportunity to network in their own time and ask further questions of the speakers as required. 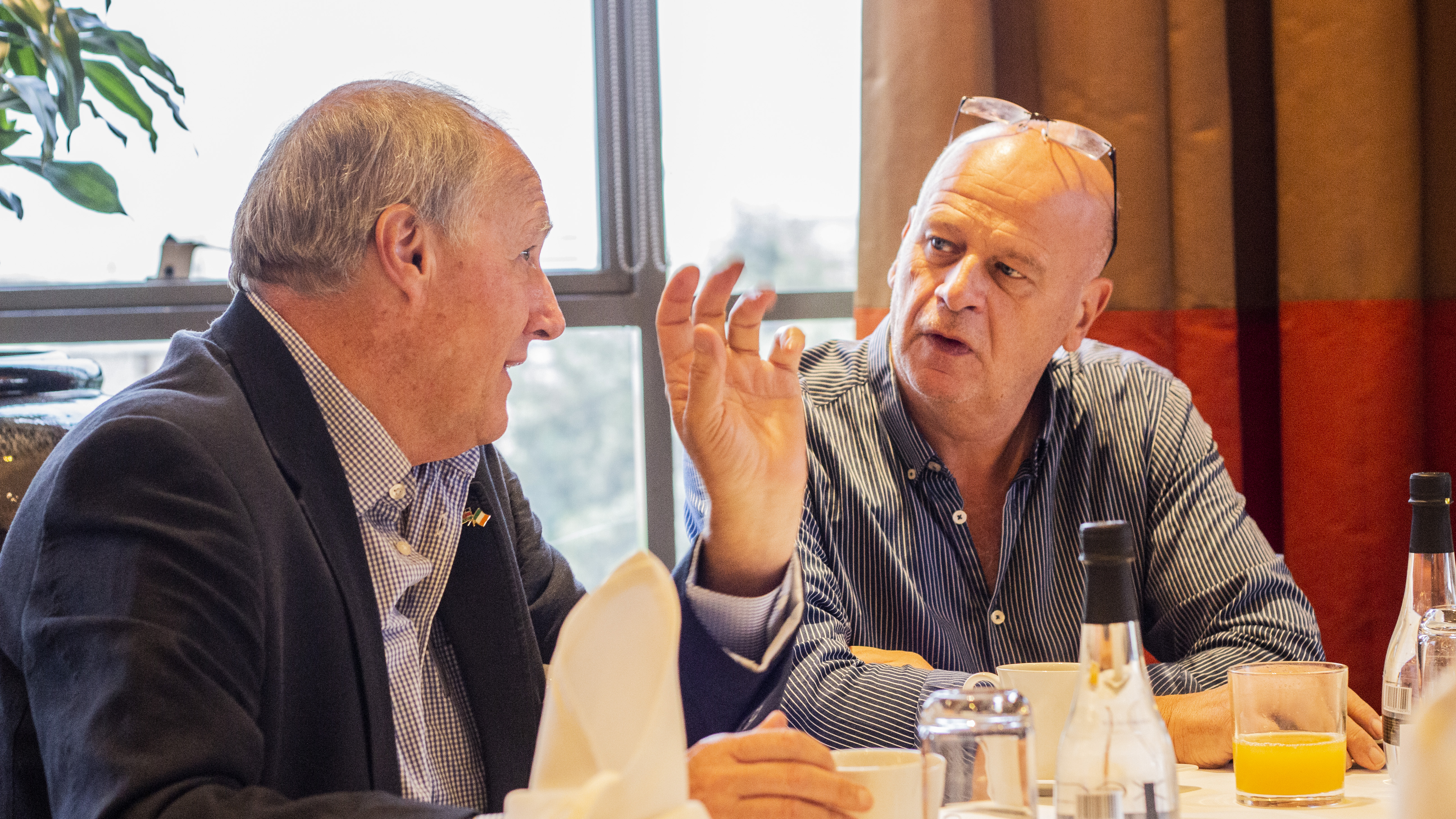 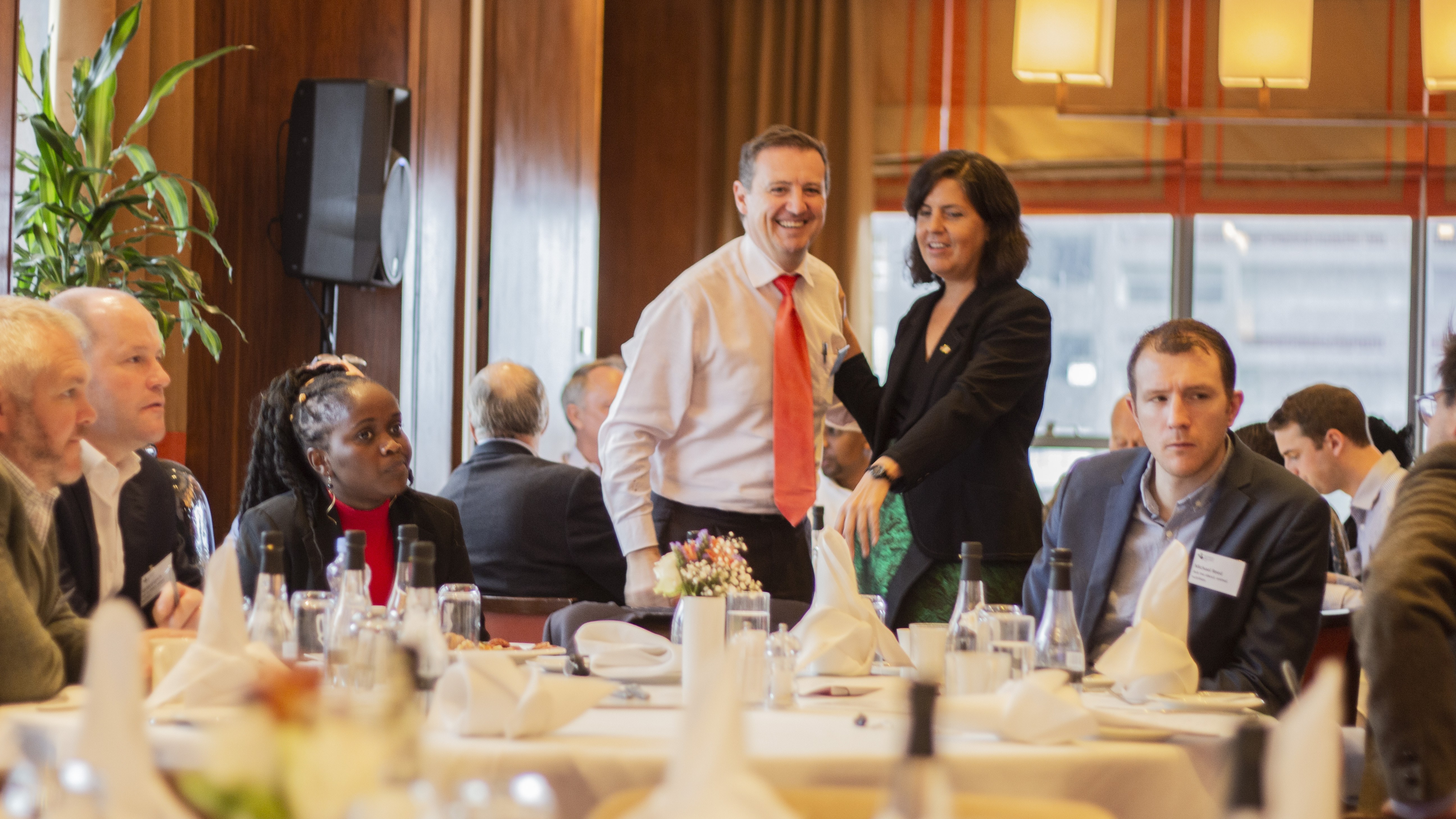 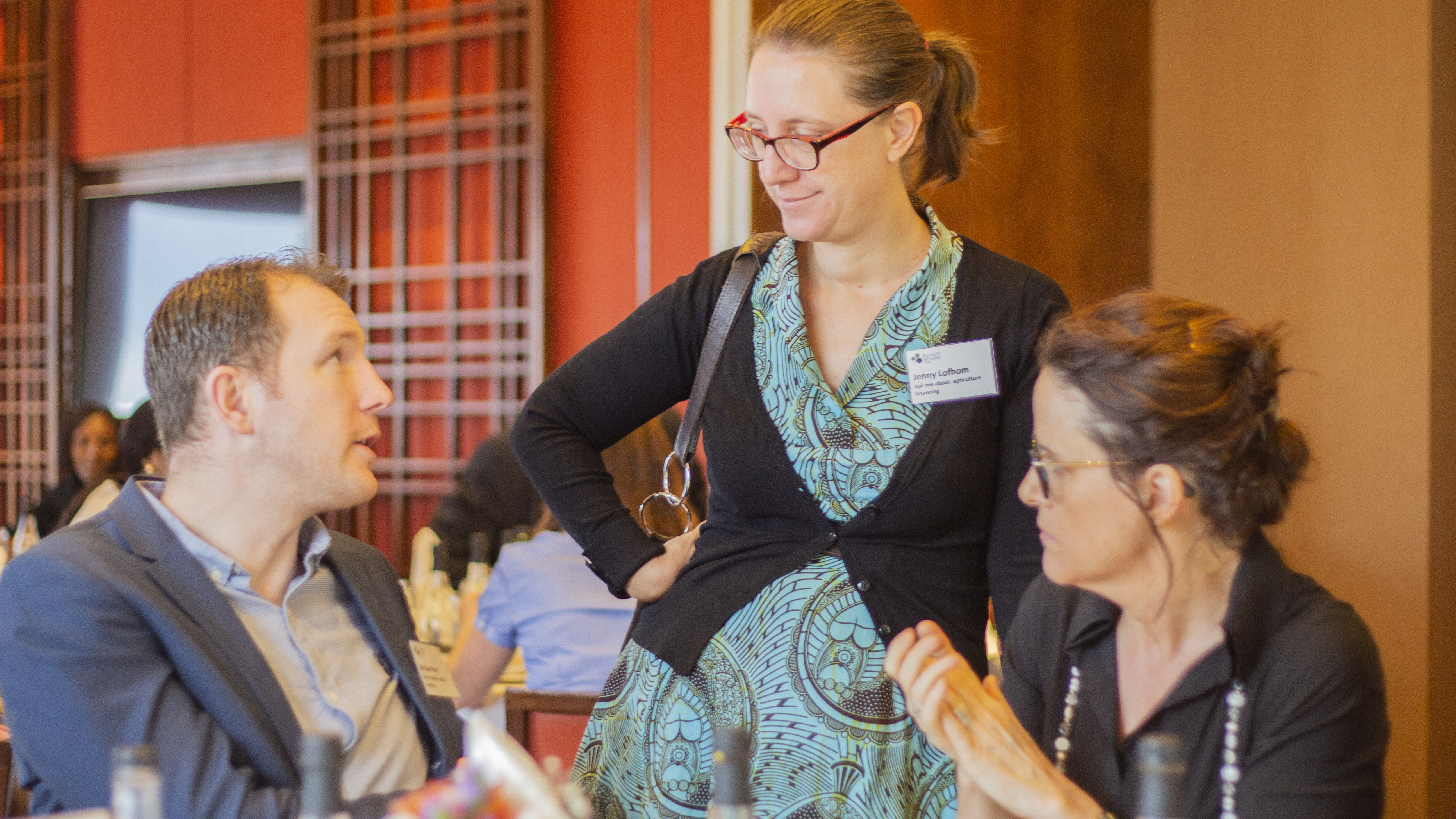 The next Business Breakfast will be held on 3rd May 2019. An agenda will be shared with BIK members in due course.