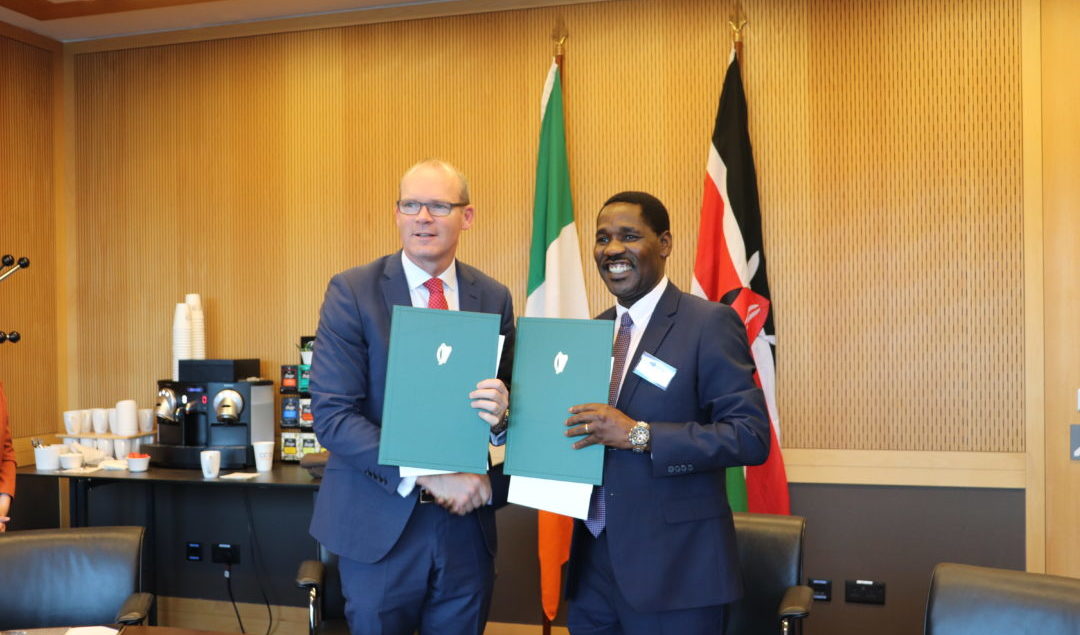 On Thursday, 11th October, Cabinet Secretary Peter Munya and the Deputy Prime Minister and Minister for Foreign Affairs and Trade of Ireland, Simon Coveney signed a Letter of Intent (LOI) on Strengthening Bilateral Economic and Trade Cooperation between Kenya and Ireland.

CS Munya was attending the bi-annual Africa Ireland Economic Forum in Dublin, Ireland where he was the Keynote speaker. He was accompanied by Kenyan agribusinesses in the coffee, tea and fertilizer sector including Kenya Tea Packers Limited, Melvins Tea, Kenya Co-Operative Coffee Exporters, Mea Limited and Sasini. Kenya Private Sector Alliance and Business Ireland Kenya – as an association that works to increase business activity and trade levels between Ireland and Kenya – were also represented in the delegation.

First held in 2011, the Africa Ireland Economic Forum is now a regular event that provides a platform for discussion on emerging opportunities for trade and investment between Ireland and Africa. The Forum attracted a mix of African and Irish speakers, with the intended aim of increasing awareness of Africa among Irish businesses, and provide an opportunity for interaction between African and Irish companies. The event has grown to become the largest Africa-focussed economic event in Ireland; and the last Forum, in 2016, was attended by over 400 participants. The 2018 Forum address the themes of ‘agri-food’ and ‘women in businesses.

Cabinet Secretary for Trade, Cooperatives and Industry, Peter Munya and the Kenyan AIEF Delegation during a presentation from IDA- Ireland’s Investment Promotion & Development Agency at the Embassy of Kenya in Dublin.

In addition to attending the forum, the CS and the delegation met with IDA – Ireland’s Investment Promotion and Development agency-and International Development Ireland- a consulting firm working to build the capacity of the Kenya Investment Authority One Stop Centre- to learn about Ireland’s experience in attracting FDI; and visited Dawn Foods, a leading Irish agri-business. He also attended a roundtable meeting on Trade and Investment where 40 representatives of Irish companies along with the Africa Ireland Economic Forum Delegations of Kenya, Tanzania, Uganda and Ethiopia discussed the opportunities for strengthening trade and investment between Ireland and East Africa.

Over the past 100 years, Kenya and Ireland have had friendly historical relationships with Irish missionaries, non-government organizations, businesses and individuals who have worked throughout Kenya and have greatly assisted in improving the livelihoods of Kenyan citizens. In the area of trade, trade between the two countries increased by 82% from USD 45Million (Ksh 4.5Billion) in 2007 to USD 82 Million (Ksh 8.2 Billion) in 2016. Kenya’s exports to Ireland in 2017 were valued at USD 13.5 Million (Ksh 1.35 Billion) while imports were valued at USD 32.5 Million (Ksh 3.25 Billion). Principal exports from Ireland to Kenya include manufacturing metals, office machines, cereals and beverages. While Principal imports from Kenya to Ireland include coffee, tea, fruit and vegetables. In terms of trade in services total trade between Ireland has grown by 78% from USD 57 Million in 2012 to USD 100 Million in 2016. Services exported to Ireland by Kenya in 2016 were valued at USD 16 Million while imports from Kenya were valued at USD 85 Million.  Beyond, facilitating trade the Government of Ireland through the Embassy in Nairobi is supporting key trade and investment facilitation institutions through capacity building programmes that contribute and impact on improving the doing business environment in Kenya.

The Letter of Intent commits to assessing the scope for increased cooperation between Ireland and Kenya, in the economic, commercial and technical fields. Areas of cooperation will include, agriculture, health and medical technology, ICT, Construction, Financial technology, tourism, clean and renewable energy technologies, education and aviation. The LOI has initiated the development of a full trade agreement between Kenya and Ireland.