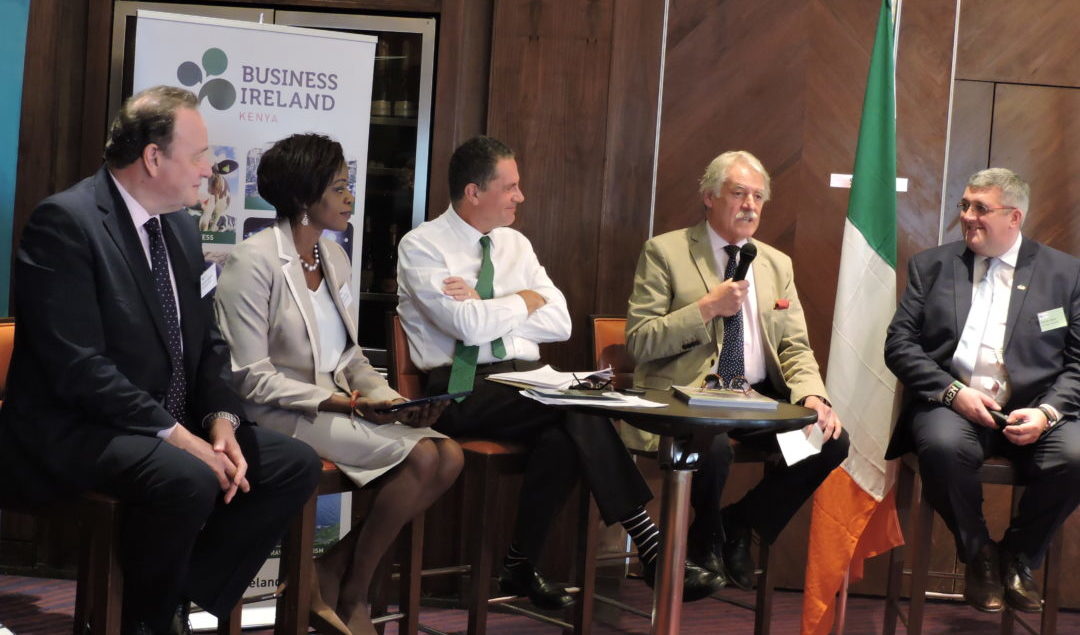 The fourth BIK Breakfast Meeting of 2018 was held on Friday, 5th October 2018 at the Capital Club East Africa in Nairobi, Kenya from 7.30 am with approximately 60 members attending.

The Chair, Niall Meany, welcomed all present to the meeting and gave a brief overview of the agenda.

The Chair introduced the Ambassador who in his remarks provided an overview of the Kenyan and Irish economies, current trade between both countries and an update on Embassy initiatives.

In particular, the Ambassador noted the following:

A security briefing was provided by Warrior Insight which noted that the current overall security situation in Kenya was calm.  Recent terrorist activities were noted in July and August, and in the third quarter, terrorism activity was confined to counties lying on the Kenya-Somalia However, there was a significant drop in the number of attacks over the previous months.

The recent hike on fuel tax would likely have an impact on crime levels as increase will put pressure on low income segments of the population which could result in an increase in opportunistic crimes. Stakeholders in the tourism sector should take note of areas where travellers interface with densely populated areas such as on roads, parks, open air markets as the opportunity for criminals to target these areas are high. Ethnically motivated clashes have recently been reported but would most likely have no direct impact on third parties such as travellers; although there is potential for disruptions to travel. The briefing concluded on police reforms that are meant to introduce a more effective and coordinated response to security incidents.

Presentation by Dr. Betty Radier, CEO of Kenya Tourism Board

Dr. Betty Radier opened the session with an engaging Magical Kenya video about Tourism in Kenya entitled: ‘Come live the magic’.  She proceeded to introduce the Kenya Tourism Board (KTB) as a State agency mandated to market Kenya at local, national, regional and international levels as a premier tourist destination. In her address, she highlighted the following points:

This growth may be attributed to;: Increased investment in promoting domestic tourism; infrastructure development providing access to tourist attractions; opening up of new properties and entry of more international brands giving more confidence in the destination; the rise in alternative accommodation such as homestays and furnished apartments that are perceived to be more affordable than the conventional hotel accommodation and affordable packages developed by tour operators and domestic carriers, targeting weekends and short holidays.

Each speaker had an opportunity to provide some perspectives on tourism opportunities for BIK members.

Alastair gave some brief background on the Hemingways Group. He noted that tourism is important as it creates job markets both locally and internationally. In his address, he highlighted the following:

David shared his experience of working for many years in the sector. He acknowledged the great hospitality that Kenyans provide and that Irish-Kenyan interaction should be further strengthened to promote tourism and trade between both countries; highlighting similarities between both countries.  He believes that there are many opportunities for business working directly and indirectly in tourism, and that there is a lot that can be done to increase the number of Irish tourists in Kenya and vice versa.  He mentioned particular areas that could be further developed, such as tourism related to golf.

The Ambassador began by noting that tourism is the 2nd most important industry in Ireland. Among the key highlights from his address are the following;

The moderator asked the panellists the following questions:

Q1. How will direct flights to and from the US affect tourism in Kenya?

Dr. Betty Radier acknowledged that direct flights will boost Kenya’s tourism and trade by improving access and connectivity. The government of Kenya also has to consider access (infrastructure) to the counties. The SGR for example, has led to high numbers of domestic tourists to Mombasa because of ease of access.

Q2. What more can be done to promote other beautiful parts of Kenya, apart from Coast and safaris?

Alastair Addison pointed out that each county should have a strategy to strengthen tourism. This can be achieved through setting up long term plans that can include; building lodges, roads and other infrastructure that support tourism and engaging travel agents who share information about the areas to visit in specific counties. He emphasised that infrastructure, security and value for money are key aspects of tourism promotion. There is need to educate counties to understand the importance of tourism in Kenya.

Q3. What role do you see for the Embassy and BIK in strengthening links in tourism and hospitality?

Ambassador O’Neill responded that this would need to be done through incorporating tourism promotion in the Embassy and BIK’s work to create awareness and by using opportunities such as the African Ireland Economic Forum to promote tourism and through sports. When bringing delegations to Kenya, they can be given material on Kenya as a tourism destination. He noted the importance of having a long term vision for attracting Irish tourists to Kenya, and vice versa.

Q4 What are your suggestions for BIK and the Embassy to increase tourism between Kenya- Ireland?

A number of BIK members and guests provided suggestions from the floor including Jake Grieves, Simon Shrubsole, Tracy Scott and Martin Hoeck. These included:

As the panel discussion was concluding, and in direct response to comments made relating to JKIA, Dr. Betty Radier highlighted the following:

Following the guest speakers’ presentations and panel discussion, the meeting was concluded with closing remarks by the BIK Chair at 9.45 am and BIK members were then given the opportunity to network.

The next meeting – the Business Ireland Kenya Annual General Meeting (AGM) – will be held at the Capital Club on Friday, 7th December, 2018. An agenda will be shared with members in due course.